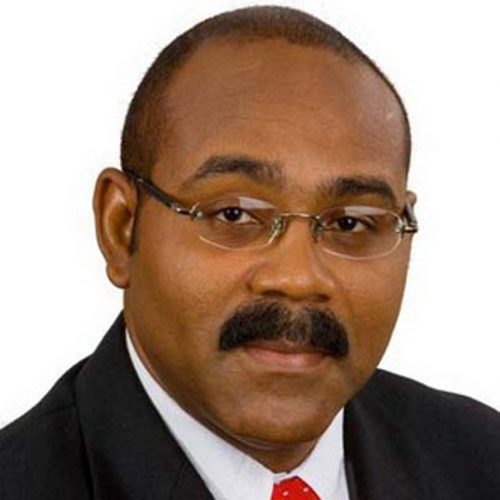 Gaston Browne is the Prime Minister and Minister of Finance, Corporate Governance and Public Private Partnerships in Antigua and Barbuda. He is a graduate of the University of Manchester, United Kingdom, with a Master of Business Administration (MBA), majoring in Banking and Finance. He served as Commercial Banking Manager for a major banking consortium in Antigua and Barbuda, comprising offshore and onshore banks and trust company, managing in excess of US $400m dollars in assets.

He became an elected member of Parliament in 1999 representing the constituency of St. John’s City West and has been re-elected in four subsequent general elections.

PM Gaston Browne is well known for his philanthropic work which is seen through his contributions to the empowerment of the Point and Villa areas within his Constituency.

In 2012, he was elected as Leader of the Antigua and Barbuda Labour Party which he steered to victory in General Elections in 2014, becoming Prime Minister. His ABLP won again in March 2018, increasing its representation in Parliament.

Between 1999 and 2004, he served as Minister of Planning, Trade, Industry, Commerce and Public Service Affairs. While in opposition in Parliament between 2004 and 2014, PM Browne returned to the private sector as a businessman and launched several successful ventures to include real estate development and real estate management.

Prime Minister Gaston Browne has also published a number of academic and policy based papers, his most recent being: “Ending De-Risking in the Caribbean: Eliminating risks for the World”.

On becoming Prime Minister, the Caribbean Heads of Government appointed him to have lead responsibility for financial matters, cricket, aviation and de-risking in the quasi Cabinet of CARICOM.

Prime Minister Browne is married to Member of Parliament Mrs. Maria Bird-Browne and is the father of four children. He has special interest in soccer, cricket and yachting.